Continuing our association with the EDITION brand, we were delighted to be involved in this effortlessly cool hotel – the first for EDITION on the West Coast of America. Evoking the energy and spirit of the iconic Sunset Boulevard and its rich history of cultural revolutions, The West Hollywood EDITION channels the past to create a gathering place for a new generation.

Designed by hotelier Ian Schrager and London-based architect John Pawson, the hotel offers a boutique and very Californian experience, with lush foliage, open spaces, and sweeping views from the ocean of Santa Monica to the skyscrapers of downtown Los Angeles. As with each EDITION property, the design-forward accommodation is completely unique, reflecting the cultural and social milieu of its location and time. 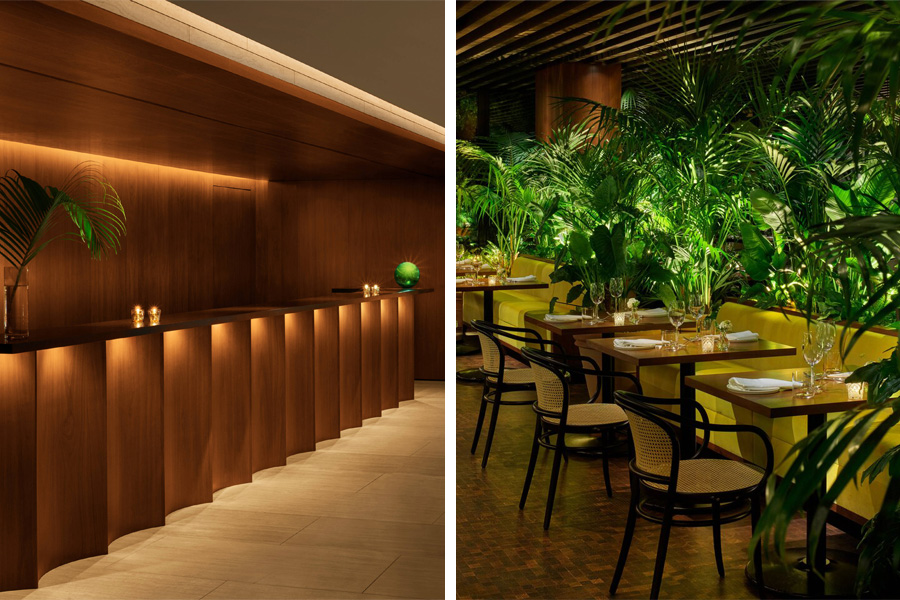 Schrager and Pawson, who is known for his mastery of space and refined sensibility, successfully juxtapose design elements resulting in unexpected, refreshing, and playful interiors. From the dramatic proportions and discerning pops of colour in the art-filled lobby, to the floor-to-ceiling greenery, vine-covered terraces and lush tropical potted plants throughout the public spaces, the stylishly modern décor and detailing are truly one-of-a-kind. 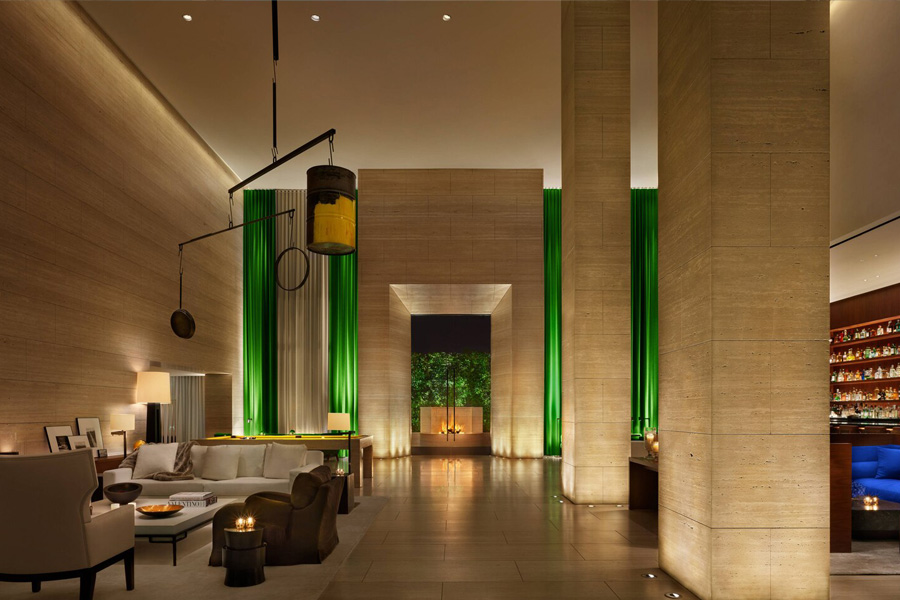 The guest rooms are restful and serene in contrast to the scene below. Light-filled, spacious rooms and suites feature meticulous detailing, expansive terraces, and breathtaking views of Los Angeles and the Hollywood Hills. A soothing neutral palette, together with the floor-to-ceiling windows, reflect the unique light and warmth of Los Angeles. The overall feel is minimalist with an air of refined sophistication yet is inviting and comfortable all at once. 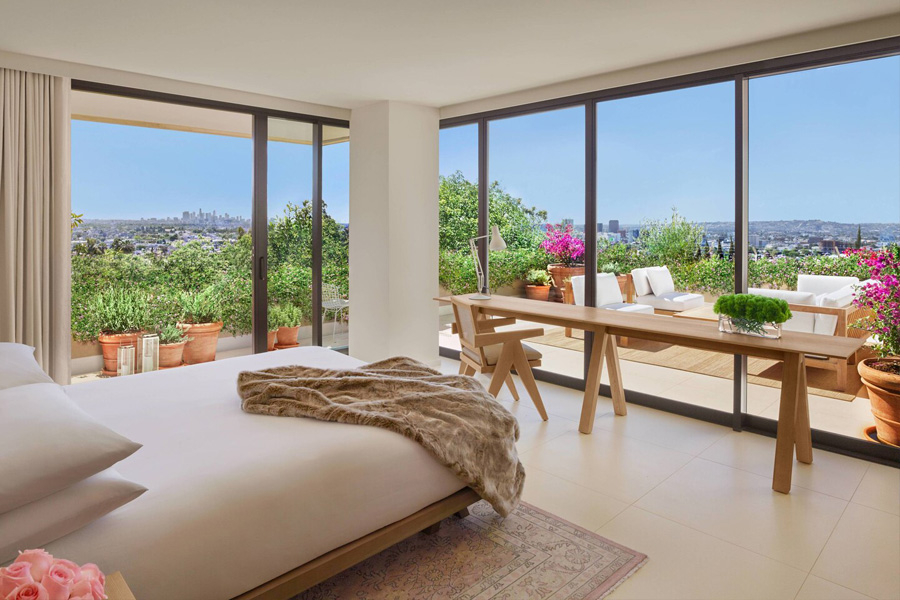 In the bathrooms, our luxurious and sustainable, apaiserMARBLE® luxury baths and stone vanities harmonises seamlessly with travertine walls and floors. Deep, freestanding soaking baths and sleek marble vanities were custom-made in a bespoke finish, inspired by the colour of that special, Californian light. A timeless oasis of calm above the bustle of the Sunset Strip.

“The most sustainable design is that which endures.” – Belinda Try, President and Founder of apaiser 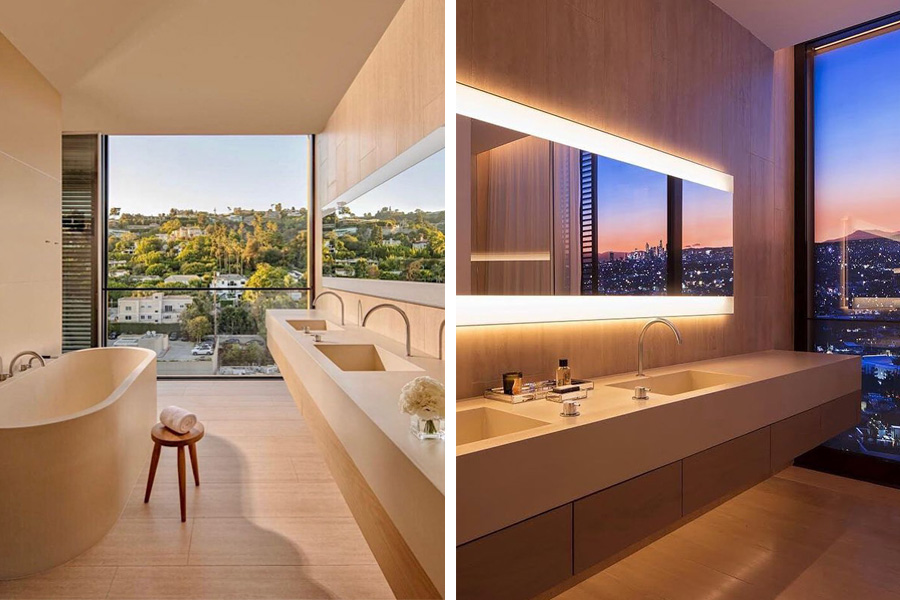 Founded on a strong belief in lasting design, apaiser luxury bathware is designed and built to endure. It is little wonder apaiser has been chosen to create stunning custom pieces for EDITION Hotels over the years – from London to Miami, New York and Times Square, and now Los Angeles.

Located in international gateway cities and unique destinations throughout the world, the EDITION hotels combine the personal, intimate, and individualized experience that Ian Schrager is known for, with the global reach, operational expertise, and scale of Marriott. 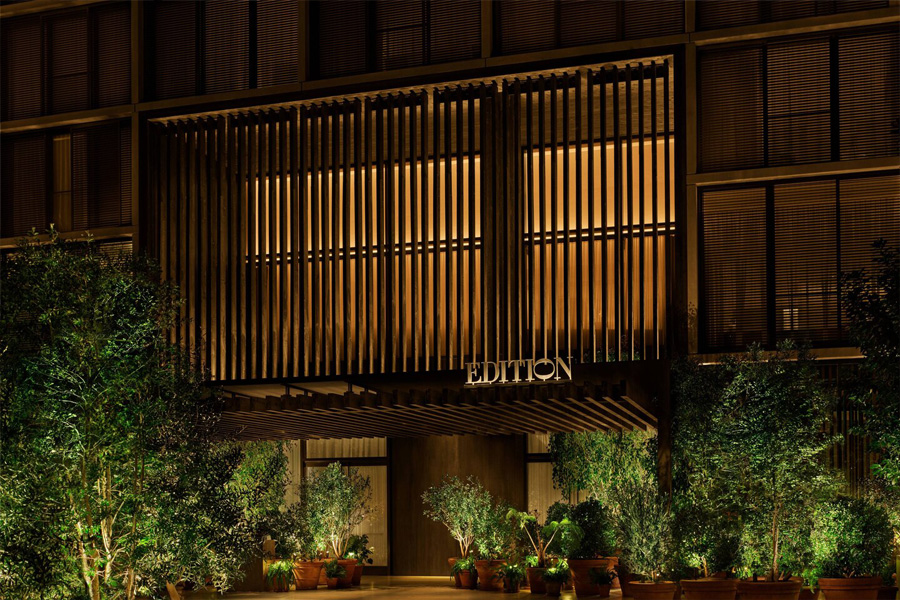 The London EDITION
Launched in 2013, The London Edition Hotel was the first of many successful design collaborations between apaiser and the hotel group. It merges tradition and modern luxury by paying homage to the building’s history with a contemporary approach. Designed by Ian Schrager and Yabu Pushelberg, the minimalist rooms in this boutique hotel show a sophisticated design sensibility that is refined and enduring. Custom stone baths and vanities elegantly complement the light-filled all-white bathrooms with clean lines and classic shapes. 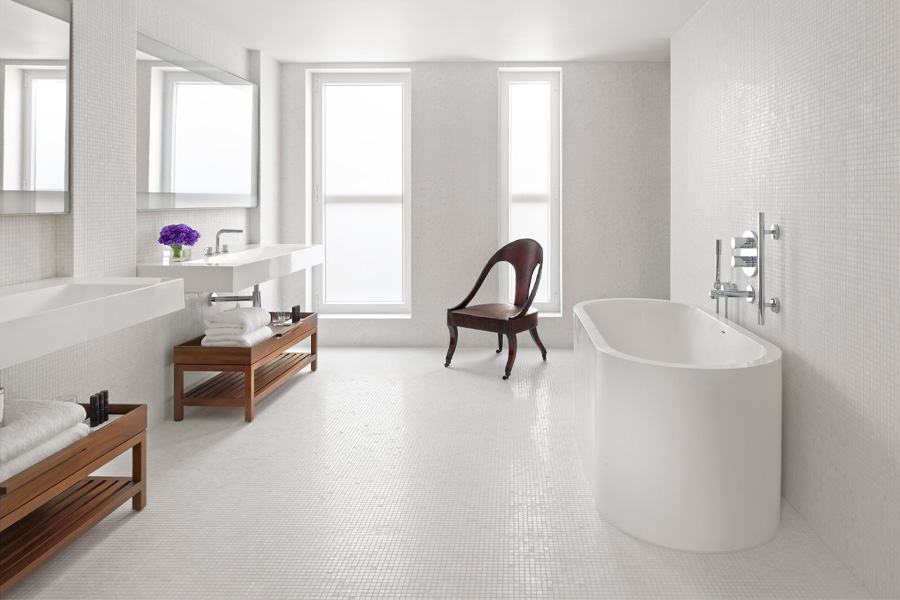 The Miami Beach EDITION
The following year saw the addition of The Miami Beach EDITION, which fused boutique hotel with 5-star, beach resort. Again, Ian Schrager and Yabu Pushelberg combined sophistication and modern design elements, but with a seaside aesthetic, through the use of natural, earthy materials in soft, neutral colours. The individually designed rooms, suites, and bungalows offer exquisite detailing and contemporary furnishings with city or ocean views. All the marble bathrooms have an enclosed rain shower and feature sleek apaiserMARBLE custom designed vanities to create an illusion of space and lightness. 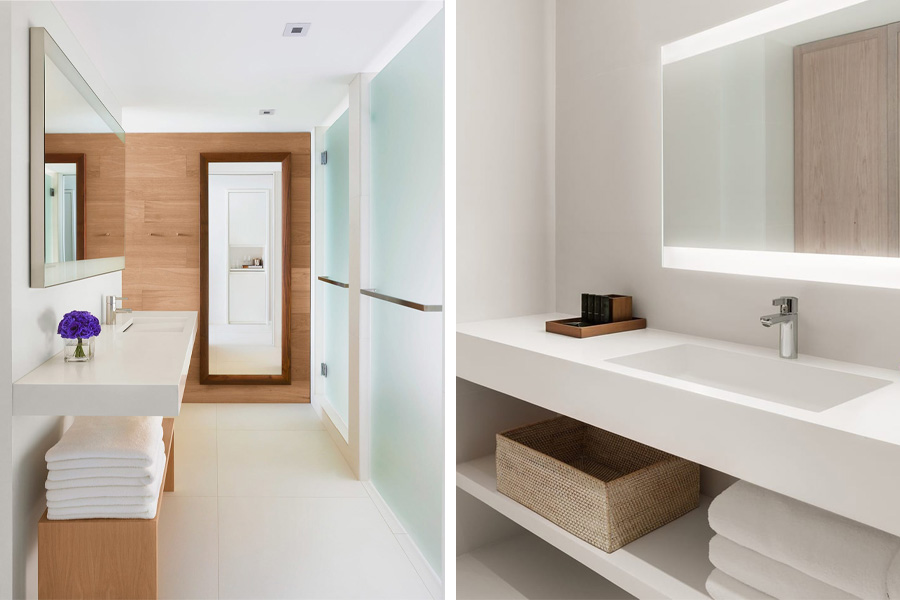 The New York EDITION
The New York EDITION saw a collaboration between Ian Schrager and local firm, Rockwell Group – a marriage of refined sophistication and innovation. Launched in 2015, the hotel blends original, opulent design detailing from the buildings clocktower heritage, with contemporary elements to create an atmosphere akin to a cosy, private residence. With its wealth of individual touches, modern sensibility and emphasis on comfort and quality, our tailor-made marble baths, shower bases and vanities in a custom finish were the perfect choice for the bathrooms, creating a private sanctuary which is understated and timeless. 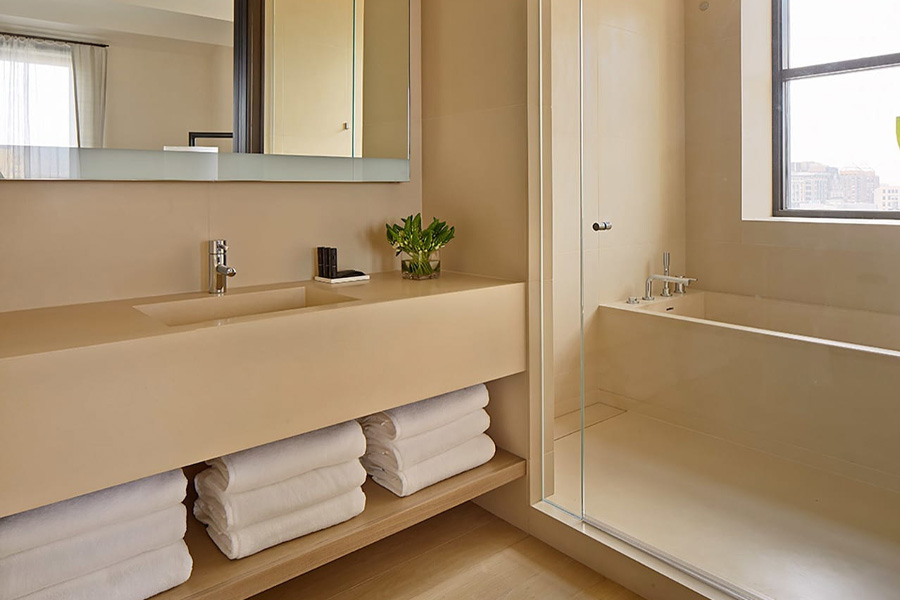 The Times Square EDITION
Merging the timeless aesthetic of Ian Schrager, the imaginative work of Yabu Pushelberg, and the bold buzz of New York City, The Times Square EDITION which opened in 2019, provides an immersive lifestyle destination fuelled by urban energy. In contrast to the moody, intriguing public spaces, the stylish guest rooms and suites are minimal and calming with a residential feel. Bespoke apaiser freestanding baths and stone vanities in a custom finish were created to continue the elegant and restrained design language through to the guest bathrooms. 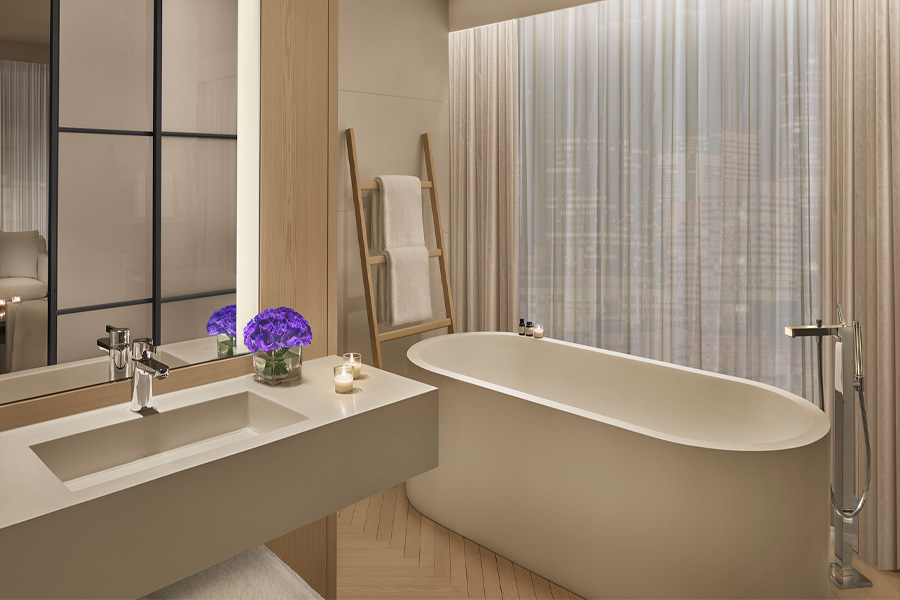 apaiser has been thrilled to be affiliated with so many of these glamourous properties and we look forward to more successful collaborations in the future.

Contact us for more information about apaiser Bath Couture – our sales consultants and design team would love to work with you to create bespoke bathware pieces exclusively for your next project.